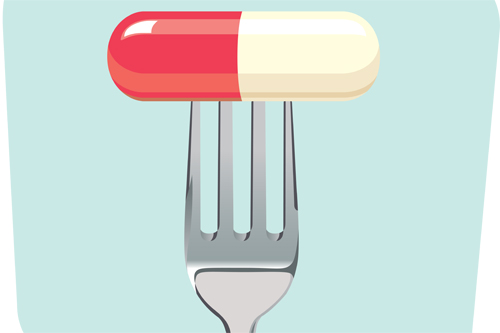 Peptides and proteins generally have low bioavailability when taken by mouth, and this hurdle has generally prevented the oral delivery of many biologic drugs in the past. However, plant cell walls may be ideal transporters to move protein-based drugs through the digestive system without the drugs being exposed to degradation by stomach acids and enzymes, say a group of researchers from the University of Pennsylvania. In a new study, the researchers, led by Henry Daniell, PhD, professor and interim chair, Department of Biochemistry, say that drugs manufactured in plant cells are not only delivered orally more efficiently, they also allow for the elimination of various purification and cold chain steps that are typically required with proteins manufactured in mammalian, yeast, and bacterial cells.

Using plant systems as bioreactors has many benefits, the researchers write. “Protein drugs [PDs] made in chloroplasts are stable in lyophilized plant cells when stored at ambient temperatures, maintaining their folding and functional efficacy for several years, thereby eliminating expensive cold chain. In addition, the freeze-drying process increases the concentration of PDs and eliminates bacterial contamination.” Importantly, they write, because plants are not hosts for human pathogens, there is low risk for the transmission of immunogenic components.

In mouse models, the researchers found that when tags were fused to the protein drugs and fed to the animals orally, the plant cell walls stayed intact, or bioencapsulated, until gut microbes degraded them, releasing the drugs into the gut lumen. After passing through the intestinal epithelium, the drugs were successfully released into the circulatory or immune systems. The authors also noted that plant cells expressing cholera toxin B subunit (CTB) fusion proteins could cross the blood-brain barrier and blood-retinal barrier, and the use of plant cells would perhaps be better than some of the existing methods of drug delivery to the brain (such as direct injection, osmotic shock or ultrasound, or by passive diffusion with lipophilic molecules).

One of the challenges that has plagued oral delivery of peptide-based biopharmaceuticals is related to dosage—it is difficult to express high enough levels of product that would fit into a capsule, the authors state. They acknowledge that although chloroplasts can exhibit a high level of protein expression for transgenes, it is much for difficult to express eukaryotic human genes within prokaryotic chloroplasts. The authors are working on codon optimization programs to resolve this problem. Nonetheless, the authors believe the oral delivery of biologics could be useful to treat diseases such as diabetes, hemophilia, pulmonary arterial hypertension, ocular disease, Alzheimer’s disease, and Gaucher’s disease.